RACHEL BARRIE INDUCTED INTO THE WHISKY HALL OF FAME

RACHEL BARRIE INDUCTED INTO THE WHISKY HALL OF FAME 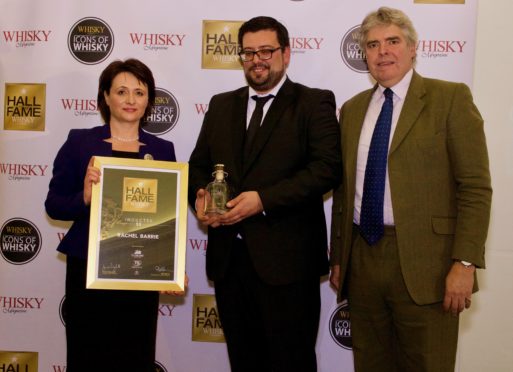 An Aberdeenshire woman who is one of only a handful of women in the ‘top job’ in the whisky industry
has been inducted into Whisky Magazine’s Hall of Fame and is the first woman in Scotch whisky to do
so.

As a Master Blender for Brown Forman’s Single Malt Scotch Whisky Distilleries, Rachel Barrie
creates some of the world’s finest single malts for The GlenDronach, BenRiach and Glenglassaugh.
Her expertise and service to the whisky industry for over 26 years was recognised by Whisky
Magazine when she was inducted into their Hall of Fame during a lunchtime ceremony on Friday 7th December.

The Hall of Fame is the highest accolade The Whisky Magazine can bestow and is their permanent
tribute honouring individuals who have made a lasting contribution to the whisky world.

Rachel’s love of whisky began in her childhood, growing up in rural Aberdeenshire, a county in
Scotland which has one of the highest concentration of distilleries in the world. Rachel studied
chemistry at the University of Edinburgh before beginning her career as a research scientist at the
Scotch Whisky Research Institute. She has received numerous industry accolades for her work
developing award-winning whiskies in addition to judging international spirits competitions and serving
on numerous industry committees. Earlier this year, Ms Barrie became the first female master blender
to be given an honorary doctorate by the University of Edinburgh.

Commenting on her induction, Brown-Forman’s Scotch brands Master Blender, Ms Barrie said:
“Being inducted into the Whisky Hall of Fame is an absolute privilege. My ambition has always been
to unlock a deeper understanding of the distillation, maturation and provenance of Scotch Whisky, to
develop and nurture richness of character and taste and celebrate it with the world; it’s wonderful to
be recognised for this.

Master Blenders and Distillers are guardians of quality: honouring the legacy and tradition of the past,
protecting spirit quality in the present, whilst innovating and continuously improving for the future. The
decisions made today provide the foundations for growth that will be built on by the master blenders
and distillers that follow. Everyday I am thankful to play my part alongside our talented distillery teams
in creating some of the finest whiskies in the world.”
Christoper Coates, Scotch Whisky Editor of Whisky Magazine said:
“Induction into the Whisky Magazine Hall of Fame is the most prestigious honour that we bestow on
members of the global whisky industry. This was a particularly special occasion as Rachel is our first
female inductee from the Scotch whisky industry and only the 55th individual to be elevated to the
Hall of Fame in the twenty-year history of our publication. For more than two decades, Dr. Rachel
Barrie has been at the forefront of developing some of our nation’s best-loved Single Malts and we
were delighted to honour her achievements.”